Friends had fretted about our safety returning to France in mid-January (we’d been delayed by the flu we had contracted just after New Year) soon after the appalling Charlie Hebdo massacres in Paris. But what struck us as we drove off the ferry and out of Calais was the number of fire service vans racing towards us; later we heard about the fire in the tunnel which was to cause long delays. We were fortunate not to be caught up in the chaos.

We were more aware of the state of alert when we went over to Strasbourg a couple of weeks later. Our ophthalmologist’s cabinet is a few doors down from the huge post-war synagogue on Rue de la Paix, a street name which seemed ironic when we saw the armed police guarding the synagogue. As we were early for my appointment, we went into a small Jewish bakery and café which does a good cup of coffee; we were to recall the scene ten days later when news broke of the shootings in the synagogue and café in Copenhagen. In Saint-Dié the small unlabelled mosque on our side of town, the modern but unused synagogue in the centre (there are no longer enough male Jews for a gathering to be quorate) and all the schools, have some flimsy barriers preventing parking immediately outside with red black and white triangular vigipirate signs. Normally there are no signs of armed police, though, as we passed the Turkish mosque on the other side of town last Friday around prayer time, there were flashing lights, police and a throng of young men on the pavement.

On a pleasanter note of welcome, the day after our return, four young deer stood on the field to the north of the house gazing at us, then moved slowly on, unworried. Several weeks of grey, clammy weather followed, quite uninviting for walks. 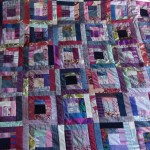 So the Letchworth quilt got finished and there was plenty of time to enjoy the wonderful pile of Christmas present books. One of them was the very entertaining “1,000 years of annoying the French” (I’d enjoyed the author Stephen Clarke’s talk at the Geography Festival in October), especially informative on who started which wars. And on the First World War, there was more background on the contribution of Indian regiments in Mulk Raj Anand’s 1939 novel “Across the black waters”. In addition to those, there was the launch in Saint-Dié of the newly published World War One diary of a young woman from Lusse, one of the villages near here which was occupied throughout the war by the Germans. As she and her two sisters ran one of the bars, they saw plenty of the occupiers, between heavy bombardments by the French on the hill above. A keen genealogist from Entre-deux-Eaux also kindly e-mailed me details of some of the young men from E2E who were killed in that war. And on a more frivolous level there was a Philomatique (the local history society) lecture on the postcards issued with tins of biscuits by the German manufacturer Leibniz during the first world war.

Meanwhile, we were not without our own sugary items, thanks to the various festivities. We still had some of our Christmas cake to have with our morning coffee (it lasted until the end of February), and, although we returned well after New Year, our Scrabble group enjoyed sharing out a New Year galette des rois with cider at the end of a game. Then came Chandeleur (Candlemas) and magazines were filled with elaborate pancake recipes (we contented ourselves with Grand Marnier or Limoncello inside); that didn’t stop us from marking Shrove Tuesday a couple of weeks later in the English fashion with more pancakes with liqueurs rather than with the traditional French beignets (doughnuts). And at the February meeting of the Entre-deux-Eaux oldies, after a good walk over hill and field to Saulcy led by the ex-mayor, we returned to the customary champagne and cream cakes to celebrate all the February birthdays. Now the shops are filling up with chocolate lambs, hares and fish in readiness for Easter. 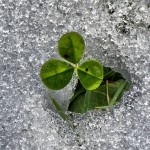 At last the had weather changed from wet and grey to white and invigorating. And the sun enticed us out for walks in the melting snow. We started off with shorter walks round the village and gradually moved further afield to old favourites round Fouchifol, the Col d’Anozel, the Col de Mandray and the hill above Roger and Dorinda’s former house in Anould.

We got some splendid, snowy views from all these, but our most panoramic must have been when we drove over to La Bresse, which is the largest ski station in N.E.France. We had in fact gone to try out a restaurant, La Table d’Angèle, which served us a good lunch of foie gras or smoked salmon, roast deer steak and desserts, which we then justified with an enjoyable walk from the Col de Grosse Pierre (between La Bresse and Gérardmer).

The snow was still quite thick up there, so children were having a great time tobogganing and adults were skiing or walking on the ungainly-looking raquettes.

A lot of you will remember meals at the Auberge Frankenbourg in La Vancelle, and won’t be surprised that we have had a couple of good lunches there. It already has its new 2015 Michelin plaque proudly displayed. On the day of our Strasbourg trip we tried out the unpronounceable-looking Zuem Ysehuet (the “Iron Hat” in Alsacian dialect), a recently renovated small restaurant fronting the canal. Apparently President Hollande had entertained Angela Merkel there the week before (presumably planning their Ukraine jaunt), but we all looked quite ordinary and undiplomatic, with no covert bodyguards.

And then the weather changed again. We would wake to white vistas, now heavy frosts, but the days were sunny and warm and lured us out to the garden and orchard. The 2014 potager crops are down to curly kale, Jerusalem artichokes and leeks, and there’s a limit to how many Jerusalem artichokes one can comfortably eat! One afternoon we picked most of the leeks and the freezer is now well stocked with soup (and it’s leek and mushroom omelette tonight). It’s the first year we’ve grown curly kale and, unlike sprouts, cauliflower and broccoli, it has flourished here and makes a great Sunday lunch vegetable with added ginger, garlic and mushrooms. 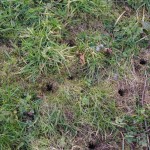 Holes in the orchard

We have just replaced the raspberries in the fruit cage, as the old ones were dwindling in output and added another blackberry. We toyed with planting some cheap gladioli bulbs, but having seen all the new vole-runs in the orchard in addition to those in the flower garden, we decided not to give the wretched voles one of their favourite foods (they’ve appreciated our tulips too), but to take the bulbs to Letchworth. 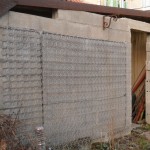 John solved the problem of what to do with the old divan springs, which were blocking the farmhouse corridor after we got a new mattress, by cutting them into three sections and attaching them to the ugly breeze-block wall below the ramp – once the clematis and the Virginia creeper spread it should look colourful. And today I’ve been scattering seeds from last year’s plants in the tubs in front of the house and on a grassy bank. There’s still masses to do this spring with rotavating the vegetable patch and sowing, but it will have to wait till we’re back from Letchworth and the garden there!

And finally some hopeful news on John’s thirty-year-old back problem. Over the years he’s worked his way through the local kinestherapeutes or physiotherapists and the dismissive rhumatologue in Saint-Dié (“It’s normal for your age. Just get on with your life and don’t come back unless you’re in pain at the moment.” What, normal for the bottom disc to collapse completely several times a year?) After a three month wait (even in France!) John had an appointment with a rheumatologist in Epinal who was recommended by a friend. We had a pleasant drive over to Epinal in the sunshine last Friday. We strolled along the river bank and had to wait for a whole school of teenagers in fancy dress to troop across the narrow footbridge, hooters blaring and whistles blowing before we could cross. Was it Carnival? (It was Red Nose day in UK, but surely not that). After all that excitement and the inevitable wait at the consultation rooms, the rheumatologist was very pleasant, listened carefully, looked at previous x-rays, had a good (ie painful) feel and then discussed options. As a result John has an appointment with a surgeon in Nancy on May 4th to discuss the possibility of surgery (a more long-term solution than injections which would just reduce the ongoing pain). Afterwards we sat outside in the old square and had a coffee in the sunshine and felt that progress was being made at last, even if other plans have to be suspended for a few months.