The Church celebrates the birth of Saint Jean le Baptiste on June 24 at the time of the summer solstice. Many rituals are associated with this festival, some of which seem to come directly from the old great Celtic festivals for the summer solstice when this night was considered supernatural and there were ceremonial fires. The practice of having fires of Midsummer’s Day remains very long-lived in many cities and villages of the Western world.

Click on the photo to see the full set of photographs of the feu de Saint Jean in our nearby village of Saulcy sur Meurthe taken on 18 June 2005. 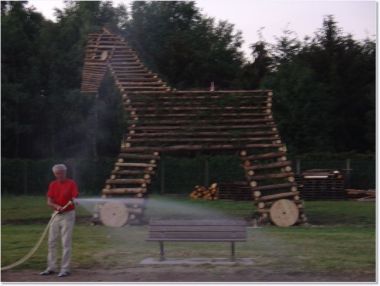