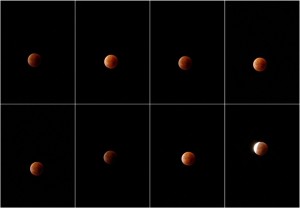 We’d had bright days but cloudy evenings and misty mornings in the days before 27/28 September. So I hadn’t set my alarm, done any preparatory reading on how best to take moon eclipse photographs or got out a camera with appropriate lens and tripod. But I woke when the eclipse was about half over. Looking out, the sky was clear after all and the moon was not to the north where there is light pollution from the nearby towns.

I hurriedly found my Pentax DSLR which had a telephoto zoom lens already attached and my old tripod which has a slightly damaged camera mount (the new tripod was in the car boot!) So, not having really thought about aperture, exposure, etc. I started out with a 30 seconds exposure. But, after taking the camera memory card upstairs to the computer to check, discovered the moon/earth moved too much in that time. So, after wasting more time on a few similar exposure checks, I finally settled on 1/30-1/4 sec f8-f11 at 3200 ASA as OK. These are some cropped images from 5:00-5:35am. I wish I’d had time to get out a longer telephoto lens and also taken some photos at 800 ASA for better quality.

Unfortunately it will be some time before I can try again – but I’ll make sure I’m better prepared!