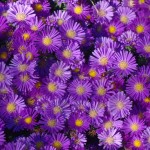 It has so definitely been a season of mellow fruitfulness here – with early morning mists, purple Michaelmas daisies, walnuts, apples and evening bonfire smoke white against the hazy blue hills.

Having spent much of August in Letchworth, the abiding image from our penultimate day is also of colour and fecundity with history thrown in: a stately couple pedalling up the drive of the old manor house in Hemingford Grey, between beautiful lawns, flower beds and vegetables, he on a penny farthing and she on 1903 upright with splendid acetylene front lamp. We were all four visiting the home of children’s author Lucy Boston, near St Ives (the Green Knowe of her books). And our guide was a man from the village who had done some of the building and maintenance work on the Norman manor house and was also keen on old cycles. So a wonderful coinciding of diverse interests – old houses, children’s books, bicycles, patchwork, DIY and gardening (for Lucy Boston also enjoyed quilting and created her garden from scratch). English nostalgia at its best.

Our harvest when we got back here in early September was courgettes (which were, of course, giant marrows by then), green beans, squash, dill, raspberries and blackberries. But our beds, alas were not the immaculate lawn-bordered plots of the old manor, but festooned with lanky weeds. Now it’s beetroot, carrots, apples, walnuts and leeks. But secretive mushroom questers have been disappointed after the extremely hot, dry summer. From the hills ecstatic barking and shots were heard, and huddles of four-by-fours and flashes of red safety jackets glimpsed as the hunting season opened. 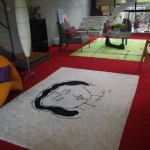 Sadly we have no old mediaeval manor houses to visit round Entre-deux-Eaux, but on the Journées du Patrimoine this September, Saint Dié focussed on its twentieth century buildings and concrete. For the first year, the eighty-six year old artist Pierre Didier opened his 1998 glass and concrete house to the public. Its narrow oblong shape was determined by the narrow, hillside plot, and was a dramatic statement of stacked concrete cubes from the outside. Inside bold paintings and sculptures reminiscent of Léger were dramatic against the plain concrete panel walls, with fifties style chairs, Picasso-like rugs, piled art books, a studio and fabulous views across the leafy outskirts to the hills. 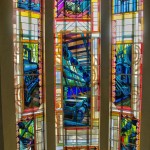 Next we stopped to see the Art Deco staircase and glass of the Gantois factory, which manufactures strong wire mesh and has a rhinoceros as its emblem of strength and durability. Finally the lime green perforated-metal-clad recent conversion of an ancient textile factory to La Nef cultural centre (complete with rehearsing orchestra, of course). But we yet again failed to see inside the Le Corbusier factory.

Soon after our return from Letchworth it was the E2E Oldies “beginning of term” lunch, cooked, as has become the custom, by the hospitable ex-fireman’s wife. We gathered over very good nibbles and aperitif, then sat down to a typical Vosgean omelette — baked and heavy with potatoes and smoked pork bits – with green salad then some excellent Munster and Brie cheeses. But before dessert arrived, for the meal was leisurely and had already lasted two and a half hours, the ex-mayor, who leads short walks for the younger oldies, was getting restless, so we shot off for a walk at the Col de Mandray. I realised at this point that I’d brought the plastic bag containing John’s walking boots rather than mine, so I hoped it wouldn’t be too muddy. But as we approached the first stony footpath there were squeals of protest from the former school master’s widow who was wearing thin glittery gold ballet pumps, and the former farmer’s small wife who was, as always, wearing high heels. So the walk had to set off at a stroll along the tarmac road through the forest. Later the inappropriately shod ladies gave shrill reminders that the organiser back at the hall had promised to save us some cake and champagne if we weren’t too late back, so there was a rush for the cars and the cream cakes.

There have been a longer group walks though. With the Sainte Marguerite pensioners there was the added excitement of the opening “chasse” season, as, with boar diggings everywhere, the local huntsmen had staked out a large no-go area, so we had to retrace our steps and make a detour to return to the little Chapelle de Sainte Claire and our cars. As the walk leader observed, he didn’t want anyone to get shot while he was leading. 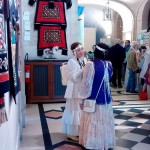 Another annual September event is the Patchwork Festival in Sainte-Marie-aux-Mines. It was as colourful and stimulating as ever. The Villa Burrus in the next small town is a splendid former industrialist’s mansion now converted into a mediatheque in its formal park. Each year its ground floor panelled rooms make a dramatic setting for some of the more exotic quilts. This year was no exception. The rooms were buzzing with the chatter of ladies in long dresses and fabulous heavy silver jewellery and with wise Mongolian features. Some of them seemed to be visiting dignitaries, while others were demonstrating the intricate leather patchwork of the leather saddles of the horsemen of Yakutia (the Sakha Republic from the far north eastern part of Russia). Among the many other exhibitions, in a small modern church hung dramatic French feminist quilts, behind a café restaurant were exquisite tiny Japanese fibre art creations in white, and in a modern block the awarding of prizes to quilts on the theme of Reflection (though not to the quilts I would have chosen!).

And of course we should not forget the annual International Geography Festival in Saint Dié. This year’s theme was Lands of the Imagination and the invited guest was Australia. This seemed to give the French geographers plenty of scope to discourse at length on the fauna, flora, geology, etc. of Australasia and the geography of Tolkien’s Shire and in French fiction, but there seemed to be no money for real Australian authors to discuss their fictional worlds. And the cookery demonstrations seemed to revolve around kangaroo and pavlova of questionable flavours like fig and strawberry or fennel and celeriac. Perhaps the French puzzlement about Australian food was reflected by one lecture on Quelle cuisine en Australie? by an academic from Canada. Possibly the talk on brewing would be more positive with the intriguing title Quels seraient les territoires de l’imaginaire pour les brasseurs? As it was, the chef doing the kangaroo and one of the pavlovas failed to make it all the way from Finisterre (or perhaps he couldn’t find any stray kangaroos). The visuals were also a bit disappointing apart from a few photocopies of the Australian coat of arms in the library, some symbols (real and imaginary aboriginal) stencilled on the pavements, while the Australian tent was serving that well known Vosgean seasonal dish of pumpkin soup. However, the rugby match between England and Australia was going to be projected onto a large screen in the market place, which would probably draw in the locals. I didn’t come “nose to nose” with the promised kangaroo or hear the didgeridoos, but did spot the large shiny yellow truck squatting opposite the Town Hall, the rain sticks made by school children, and the rugby training sessions. And I was (sad person) very interested in the discussion about the building of a new library, and the new mayor’s passion for it. 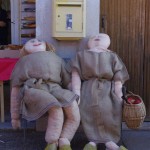 The autumn flea markets, especially those combined with seasonal festivals have been more fun. At one centred on the apple harvest in La Voivre, a small village just north of Saint Dié, the main street had been blocked off for the day, isolating the village! Strange sack-stuffed figures lolled by the bar and food. Our trophies were the totally non pc Tintin au Congo – with en Amerique tacked on, sadly no worse than all those adventure books and comics in the forties and fifties with savages and cannibals, though Tintin’s dead animal count makes that American dentist and his lion trophy seem insignificant; a 1000 piece jigsaw of many golden pieces of Klimt’s Kiss to tax our patience in Letchworth; and a salt dough harvest wreath, appropriate for the apple-harvest mood, which is now hanging in the barn over our food shelves. At the Saint Dié annual huge street market John got a rare late-1940’s 35mm camera he’s very pleased with. As we drove over the hills to the grape harvest celebrations in Barr, the vine leaves were just turning yellow on the undulating slopes, and the mirror image Black Forest over the Rhine was hazy – almost invisible – in the mist. We gave the procession a miss, and focussed on the flea market stalls in the narrow streets, to the sound of small children shrieking encouragement to their plastic ducks in races down the fast-flowing stream channelled along one side of the road and I found a new mug for my morning fruit tea. And at yesterday’s flea market in the nearby village of St. Michael, all the stall holders seemed to be so relaxed in the sun that their prices were laughable. So beware, any family members reading this, one of your parcels at Christmas this year could well be a flea-market treasure!

But, enough of these seasonal frivolities. We need to finish taming the potager and collecting and storing apples and walnuts from the orchard in E2E before we travel over to Letchworth on Saturday. We finally got organised on our last few days in Letchworth (when not visiting Green Knowe), and stripped off one wall of the large flowery red wall paper in the sitting room. So that needs some lining paper and paint on our return! And then we’ll be happy to entertain you in our less-floral décor.