To download a printable PDF version (no pictures) click on this link E2E2014no3.pdf (four A4 pages)
There are links in the text to the church restoration and to more patchwork photographs

If you were in charge, how would you choose to present the culture and geography of the British Isles to the French? What authors would you select? What music? What landscapes? What symbols?

This weekend the British Isles were the Guest of Honour at the FIG, the International Festival of Geography in St Dié des Vosges. So we eagerly awaited the programme of events (which is usually only available a couple of weeks beforehand). How disappointing to finally see the lecture titles of the mainly French contributors. The invited British Isles contributors were two jeunes auteurs irlandais Paul Lynch and Robert McLiam Wilson, Steven Clarke of merde fame, TV presenter and blogger Alex Taylor, the Highland Dragoons Pipe Band and just possibly (who knows?) Mister Franck & la Croche Pointée who were described as rock-blues anglo-saxon. British gastronomy was to be recreated entirely by French chefs (mainly local) in delicacies such as tuna smoked in Earl Grey tea, bergamot and red onion pickle. The only reference to Wales in the entire programme seemed to be a cookery demonstration involving Welsh lamb.

When, at the end of the Geography Festival in 2013, they announced the British Isles would be the Guest of Honour for the following year, did they realise that all the separate countries have different tourist boards from which they might get help and contributions (in most popular French newspapers and commentaries les anglais is still used as the collective term). At all the previous Geography Festivals we’ve attended there has been a country presence including a food tent providing lunchtime snacks from the country. This year that tent was occupied by Moroccan caterers. Just think, they could have recreated one of those glamorous old-fashioned tea rooms like Betty’s or Fortnum’s with waitresses in black dresses and starched white pinnies serving tea, scones, jam and tiers of cakes – a great missed opportunity.

However, other French-produced stereotypes abounded, with Union Jacks, a red telephone box, two men in busbies and red jackets, images of the Beatles and the Rolling Stones and even an open-topped red bus (all the way from Belgium). There may even have been Big Ben in one venue. It felt horribly like Heathrow Airport Gift Shop.

The prestige lecture is usually held in the largest space, the cathedral. On Friday in the presence of the ex-mayor (who founded the FIG) and the young new mayor (who is busy exposing the financial mis-dealings of his predecessor), the president of the Conseil franco-britannique told his huge audience in echoing tones a few clichés about L’actualité des relations franco-britanniques:

but the positives are:

1) shared defence projects
2) 20 years of the Tunnel
3) the Queen (not expanded upon!)
4) the Tour de France
… at which point I crept out of the cathedral and into the adjacent library in search of more stimulating insights.

Some of the library staff had entered into the spirit and chosen their outfits with care. One with striking black hair and scarlet lipstick was wearing a scarlet tartan long jacket with black straps with metal buckles (just like we all wear over there) and another had a more typical, perhaps, black T-shirt with a harp. The two jeunes auteurs irlandais (one from Belfast and one from Donegal) had to entertain a library of mainly students and could not escape questions about another stereotype – Irish poverty. While one (Lynch) looked romantic and soulful and replied only in English (with his translator frequently getting confused and translating his words into English), the other (McLiam Wilson) joked in French as he tried to explain a little of the historical situation.

On Saturday we could have gone into St Dié a bit earlier to the culinary demonstration ambitiously entitled Tartare aux deux saumons d’Ecosse, découpe Saumon fumé Ecossais. Haggis flambé au whisky, sauce menthe. Christmas pudding flambé. Cocktail a base de produits britanniques. I wonder how many of the audience lined up to taste the haggis with whisky and mint sauce. Instead, circumventing the food tent and the sheep grazing outside (were they Welsh ones left over from an earlier cookery demonstration?), I climbed up to the top of the Tour de Liberté where Steven Clarke gave an erudite and entertaining talk in fluent French on 1000 ans de mésentente cordiale, l’histoire anglo-francaise revu par un rosbif. He admitted that the title didn’t quite capture the original of 1000 years of annoying the French, and dealt with the burden we too feel of responsibility for the death of Joan of Arc and the imprisonment of Napoleon (but no mention of Fashoda). The audience loved the quietly affectionate tone and while I disliked one of his merde books, I shall buy this one. The Highland Dragoons could just be heard piping somewhere below.

Then it was back to the library for Anne Martinetti, the French author of a strip cartoon on the life of Agatha Christie. As the minutes ticked by, it could have been an Agatha Christie title – the mystery of the vanishing lecturer. Her suitcase, the anxious librarian assured us, was behind the counter, but she was not signing books in the Book Salon and they had no idea where she was. However, no corpse was discovered and a quarter of an hour late, a charming lady dashed in, apologised for having been detained by a radio interview involving the mayor (so it would have been rude to leave), said she had a train to catch in 55 minutes time, and rattled off at high speed but in a clear voice her interest in food in Agatha Christie’s novels (the subject of an earlier book) and also A C’s biographical details. Then she signed copies and dashed off to catch her train while we re-assembled in a different part of the library for a scholarly and delightful talk on the two languages, Le francais et l’anglais, une incroyable histoire d’amour, which the audience loved.

On Sunday we had had enough of the mésentente cordiale and incroyable histoire d’amour and headed off to a flea market in a village on the far side of St Dié, which was packed with locals oblivious to the charms of Geography. John added to his Photax bakelite camera collection for a mere 2 euros and I purchased a porcelain dish for a similar amount. But the lunchtime sausages and chips looked unhealthily undercooked, so we avoided our usual Sunday treat. In the afternoon it poured with rain. No doubt the FIG concluded among jokes about the weather of the British Isles.

All this has been a pleasant diversion from the to-ing and fro-ing between E2E and Strasbourg occasioned by my cataract operation. Our ophthalmologist is in Strasbourg and so is the clinic at which she operates, a large private, non-profit, faith-based, state-approved Jewish one (so no pork, rabbit, camel or shellfish on the post-op menu). That clinic, and two others in Strasbourg run by protestants and catholics, are jointly developing a new 100M€ clinic, due to open in 2017.

While walking the streets in search of his lunch in an area we hadn’t yet explored, while I was in the operating theatre (and ending up at the SE Asian fast food Streeat), John came across the Gothic church, église protestante Saint-Pierre-le-Jeune (not to be confused with the older Saint Peter churches in Strasbourg), with wonderful-looking frescoes. A ten-year restoration of the frescoes and the church started earlier this year. And, a week later, after an eye check-up we had lunch with Marie-Laure at a small restaurant John had discovered in Koenigshoffen on the outskirts of Strasbourg and Marie-Laure told us about the Roman remains of a workmen’s village that had been uncovered nearby. So a couple of interesting things to follow up on return visits. However, all this has meant that we shan’t be returning to Letchworth in October as we’d previously intended, and will probably delay our return till Christmas and stay for longer then.

So it was good that we managed to see so many people while we were over in August, including a large family gathering of Blackmores and Tulls on a lovely sunny day. Large quantities of food were involved and also games (mainly card ones for the adults and hide-and-seek and trains for the younger ones) and sitting around in the sunshine. The spare beds were well used by Jacob and Leila that week and by Ann and David the following weekend when they attended a wedding in a nearby village. We discovered some interesting walks, one with Jacob and another when we lost the footpath across the fields with Ann and David. But on the latter walk we also came across some Belgian war graves from the First World War in the village churchyard at Norton. There were also interesting local exhibitions, including Garden Cities (at the Letchworth Heritage Museum with Ann and David), Embroidery in War (at the Letchworth Arts Centre with Ellen and David) and Letchworth at War (in the Arcade). The last was an excellent informative exhibition at which John and I asked about the Belgian War Graves. Sadly we have received no answers yet as to why their official Belgian graves are in Norton, although there was an interesting section on the large number of Belgian refugees who lived and worked in the then very new town of Letchworth. We also walked round and through the stylish spacious Spirella factory which closed in the eighties after corsets went out of fashion (apparently it had a large ballroom for the workers). We were also pleased to welcome, at different times, Jennifer, Val, and Wendy and John, and enjoyed a trip down to London to see Jessica and Mark. While in London we all went to the Matisse exhibition, which was great, and we bought a couple of prints which are now in the Letchworth sitting-room clashing horribly with the floral wallpaper (one day it will go). On our way home we stopped at Ightham Mote where we had lunch with Dorinda and Roger (fraught from their kitchen and utility room make-overs), then looked round the old house (which John and I remembered from our childhoods, before it was handed to the National Trust). And our last port of call was at Susan’s in Dymchuch (we must go to that pub again). We loved catching up with you all!

There’s not much visual interest in the Geography and Anglo-French relations above, so we’ll take our leave with a few pictures from this year’s Patchwork Festival in and around Ste-Marie-aux-Mines in September. 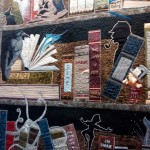 “In the library at night” patchwork detail 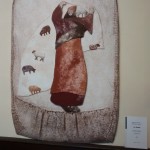 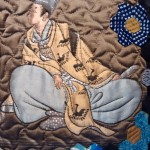 Among my favourite quilts this year were some suede ones by a French artist which were hung in one of the churches, one or two Japanese ones displayed in the mansion of a former tobacco merchant and a British competition winner on the theme “Imagine …” with her quilt “In the library at night” (and I assure you that it wasn’t just the magic word “library”).