Helen noticed little bits of polystyrene floating down one day when she was outside watering plants at the front of the house. I just thought a bird had found a bit of insulation.

In the meantime I’d seen a kestrel flying around, having not remembered seeing any here in the past.

Attic window viewed from the end of the potager

Then I remembered the polystyrene sheet I’d put behind the attic window to stop the crepi from being sprayed in when we had the outside walls redone. I went up to the attic, removed the wood which was holding the polystyrene sheet to the wall and saw a hole in the sheet and, through it, four eggs. A day or so later and Helen said she’d seen a bird with a white underside and fawn colouring flying out early one morning when she was gardening in the potager and then I saw the same a bit later when mowing. I’d not previously identified the eggs but on further internet checking I could now confirm that they probably were kestel eggs. I’d originally put a tripod near the compost heap in the hope of photographing the bird later in the day when it was cooler. I’d already told my sister I probably needed a tennis umpire’s chair to get high enough to see in to all of it properly.

Then, with no Euro football yesterday afternoon and too hot to do anything else outside, I wondered about setting up a camera to see if there was more than just the eggs. I didn’t think it was going to be possible to use my Neos webcam. But I wondered whether I could do something with my my old Samsung NC10 netbook? That originally had WinXP and we used it mainly for e-mails and web searching when travelling. But the hard disk died and when I replaced the disk I no longer had a copy of WinXP so installed Linux Mint. Again, that meant the NC10 was OK for use when travelling. But setting up a camera system was going to be a challenge as I’d no knowledge of what was available. I had a spare Logitech C270 webcam which I hoped I could use despite there not being any Linux drivers. So I spent an hour or more experimenting with download Linux camera programs just to see what might be possible. I’d originally thought of just trying to put up single image or possibly a video feed but then they would also need archive copies otherwise any activity might be missed. Then I though it might be better just to capture multiple images and either put them on a web site or combine them into a video. One of the camera programs I looked at had the ability to write files with different names which could be timestamps. I opted for one image per minute. So then it was a matter of automating the process. Not something I’d done before in Linux and it was a bit of a struggle as the process stopped running when the screensaver started. I didn’t manage to find the correct power setting and eventually just turned off the screensaver!

I ran a power cable to the far end of the attic so I could put the NC10 near to the window. I also decided to put the webcam in a box but didn’t have anything to hand except for one litre ice cream tubs. So  I made a hole in one side, just big enough for the camera lens and fixed the C270 in the box, and then made another hole for the lead out. I’d not looked through to see if there was more than eggs on the other side for a couple of days (and hoped they’d not been found by the stone marten which had played havoc with a neighbour’s chickens). The polystyrene was partially fixed by the crepi but I managed to put the box through a slight gap on the far side from the eggs, hoping I’d positioned it reasonably. I’d not checked before doing all the set-up, but the Wi-Fi signal was good enough to be able to connect the NC10 to our network and to be able to copy and process the image files on my computer. 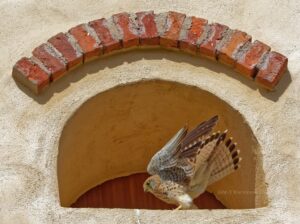 About 30 mins later a bird appeared. So it confirmed we have kestrel guests, even though there is only one at a time visiting.

The programs all ran until midnight. Then, I’m not sure why, but there was a file-naming problem and the files were no longer in the expected directory. I eventually found them (and later renamed them and put them in the correct directory). I also simplified the filenames to the minimum, so hopefully that problem is solved? Converting the one-per-minute images into an AVI video wasn’t too much of a problem but I had to experiment with various settings to get reasonable file sizes.

I’ve now put some still images and the first video on a web site
https://www.blackmores-online.info/Kestrel/