There are comprehensive sets of photographs:
Going west – Val de Gartempe and the Loire
and Villa Majorelle, Nancy
as well as some other links in the text

The good thing about visiting the UK is the pleasure of catching up with friends and family there and the bad thing is catching up with the garden here afterwards. So you won’t be surprised to read that most of our E2E time since our Easter UK visit has, apart from our Week in the West, been spent on horticultural tasks including wood-chipping, rotavating and mowing for John and composting, marking out paths and beds, weeding, sowing and planting for Helen.

Light relief has included lunch at L’Imprimerie in our Book Village (Fontenoy-la-Joute) where the chef’s surprise menu culminated in a lemon on a plate. Yes, a lemon on a plate. On being cut into it turned out to be a delicious lemon and cream concoction in a clever mould. 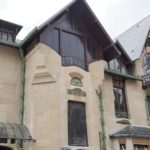 Our only Sunday flea market was a stop in a village in the faïence producing area near Nancy where we were heading to visit the Majorelle house. Some of you may have visited the famous Majorelle garden in Marrakesh belonging to the artist Jaques Majorelle, and the Nancy house is the art nouveau Villa Majorelle of his father Louis Majorelle, one of the School of Nancy craftsmen. Much of his beautiful wood and metal work survives inside, though not his furniture. It has been sadly neglected over the years, but the town has bought it and so far renovated the exterior, with the interior to follow, so we need to go back in 2020 to see the interior in its full glory. And there was also a fascinating historical conference in St Dié one weekend on the theme of Transport in the Grand Est (the posh name of our new grouping of communes of communes, departments and regions, which sounds like a Victorian Railway Company). But we somehow failed to notice the visit of President Macron to St Dié, so missed any excitement. Interestingly everyone we meets mentions “our” royal baby and Royal Wedding (and usually asks if we are going) but no one seems very interested in the proximity of their President. No doubt it will be assumed that we are going over for the wedding in a few days, rather than for Helen’s cousin’s funeral.

But for us the excitement has been in planning a short trip west as a diversion for Helen’s 75th birthday, to the Val de Gartempe whose prehistoric sites and church frescoes our friend Val had enthused about. It’s easy to forget how long it takes to cross France from east to west, so it was an after thought to set out a day early and break the journey in Troyes, and the only accommodation was in a chain ACE hotel. We were later to realise how accustomed we’d got to the standard facilities of chain hotels and how quirky and fascinating French chambre d’hôtes (like British B+Bs) can be. 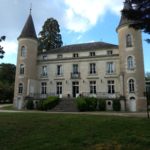 We spent our next night in the Val de Gartempe as the only guests in a small 19th century chateau whose corridor walls were lined with the owner’s exotic photos from all round the world, which was like walking through the pages of a dated National Geographic. We then stayed a couple of nights in a “manoir” chambre d’hôte run by a plump and slimy Mr Nosey and his blonde wife – he would slip out of his office or kitchen every time we came in or out to check what we were doing. But I also saw him slink out with a bottle of wine clutched against his portly belly during breakfast, and heard his wife going out, calling, to look for him shortly after. Is there a story there? It was only after we left that John realised he hadn’t restored the dangling bits of the chandelier in our bedroom that he’d tied up with twisted loo paper after he kept walking into them during the night in our over-furnished darkened bedroom. I wonder what Mr Nosey made of that? We stayed in a family-run hotel near the Loire for a night, which was intended as a birthday treat. But we got off to a bad start with Madame as we felt our rather expensive bedroom ought to have a blind in the bathroom (which had a large window overlooking the car park) and also a bath mat. There was a fitting for the blind but “it was our choice when renovating not to replace the blind”. John pinched a swimming pool towel and hung it from the fittings (and pointedly left it there in the morning). It would also be nice in an expensively refurbished room not to have to crawl under the bedside table to find a socket to charge the mobile phone (and to be unable to use the bedside light at the same time). And of course the television and phone were out of order. So after that Madame was a bit tight-lipped when she served us dinner, and for our tastes their menu gourmand was disappointingly bland. They did however do a very good breakfast the next morning and didn’t charge for it after all our various complaints! Our last night was spent in Troyes again on our way home, but this time we had a room in an elegant but untidy town house where our hostess was effervescent and obliging – such a change from the previous day – and she even provided a pretty little jug of milk for les anglais to have with their afternoon tea (it was the only room during our trip with tea-making equipment). And our French windows overlooked her front garden.

John was sadly disappointed with the restaurants in the area, with their carefully cooked food with no interesting flavours. We are perhaps spoilt by the more adventurous chefs in Alsace. However, that last night in Troyes was perfect at Valentino’s in the old town with its narrow streets and timbered houses. And no, it wasn’t a spaghetti house. We had the menu de la mer which was delicately and tastily spiced and beautifully presented. A lovely conclusion.

And of course it wasn’t all eating and sleeping. Visiting churches can always be a bit hit-and-miss as to whether they are open, but we were keen to see the frescoes in the Val de Gartempe. In the first village we stopped at we had to find the cafe and ask for the key to the little chapel. It was amazing when we opened the door, with the upper walls and ceiling covered in vibrant fifteenth century paintings of Bible scenes and a big hunting scene in which three skeletons rose from graves to remind the three carefree horsemen of their mortality. It was handy to pause for a coffee while returning the key. Further north on the other side of the river the door of a larger church was ajar, so the nesting birds could fly noisily in and out with worms, and the frescoes, especially in the side chapel, were equally vivid. The monks at the nearby St Savin Abbey clearly had greater funds available, and the lofty vaulting of their church nave had more sophisticated scenes from the Old Testament for the monks to contemplate if they craned their necks. We also headed that day towards a huge nuclear power station very close to a village with a tiny twelfth century church with amazing polychrome capitals, an informative small museum of prehistoric and mediaeval finds (some found during the construction of the power station), and a huge necropolis (with a legend that the bodies in the sarcophogi were the bodies of the army of King Clovis which were lifted up and rained down on this site after a battle); but we avoided the nearby planete des crocodiles. 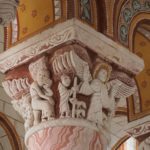 We had however, forgotten about all the public holidays in France during May. The reconstruction (sadly disappointing) of a prehistoric overhanging sculpted rock site was open on the Tuesday which was VE day. But the book shops in the book town of Montmorillon were all closed on the Thursday morning which was Ascension Day, though we did enjoy the small typewriter and calculator museum there before retreating to the mediaeval sights of Chauvigny which were open for the holiday crowds.

And we finally got to visit friends in Loches. The buildings of Loches seemed familiar as we walked around, as Anne had painted evocative watercolours over the years, many of which they had sent as Christmas cards. Sadly Anne is not well now, but we enjoyed sitting in their garden chatting to Martin. 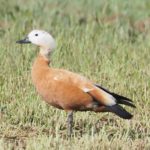 We were lucky with mainly hot weather while we were away, but have returned to a wet week of gardening. Our last newsletter mentioned our loo with a view. Our first view on our return was of the black plastic bales, as the north field’s straggling winter crop had been cut while we were away. There was also a steaming aromatic muck heap very close to the window as well as one further up the slope. As if that wasn’t enough, once the bales had been moved, the farmer began to spray liquid manure. The usual large black crows descended on the feast, then from our window yesterday we spotted two exotic birds; they are not in our bird books but Roger has kindly identified them as ruddy shelducks which are rather rare in France. Who knows what we will come back to!