You have to fly in an aeroplane above the sea to get to Grumpy and Grandma’s house in France. At the airport you have to follow the red, white and blue flag for France and not the red and white one [for Switzerland] otherwise you go to the wrong country. In the airport café they give you a lollipop if you eat all your chocolate bread.

From the car back to their house you can see big squirty water in the fields [the watering system for the maize], then grapes on both sides, then coloured houses: red, pink, lilac, turquoise, blue, custard yellow. There are tractors with enormous hay bales and lorries with long tree trunks. At the top of the mountain, we can see the whole world and one time a lorry had a tyre that exploded [just in front of us] and it had to stop there. 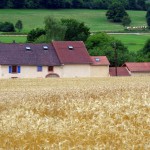 The houses are beige and white on that side. Grumpy and Grandma’s house has blue shutters. When Aunty Leila comes we have a competition to shout “I saw it first!” the loudest. I always shout the loudest. There is a big field on one side. One day a big yellow machine came to cut it [barley, in fact]. They took away the tops then they made hay bales with the stalks. But they didn’t cut all the field. There are cows there, and the tractor brought a tank of water for them to drink. From the top of the field you can see the whole world, and on the path in the woods there are God’s creatures [dung beetles] and ants and pine cones.

If you go for a walk up the road there are lots of big drains, a shed for the hay bales and then the dogs run out and jump up. The chickens are cute, but they run away. I must not touch the geese but they look at me. There are very fat rabbits in the boxes [hutches] and Grumpy lifted me up to see the hen in the hay in the dark stable with the cows. I found a black feather with white spots. [Does anyone recognise Vozelle’s small farm?]. We walk back along a stream and find a stick bridge to get back. 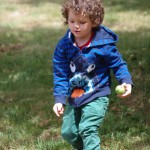 Outside there are a lot of apple and pear trees but they aren’t as good as the house for hide and seek. When the wind blows, the apples fall off the tree and we pick them up and put them in the compost heap. We put lots of things from the kitchen box in the compost heap. Grandma says it makes nice earth to go on the garden. I like the garden. I hope Daddy makes a garden like that at our house. 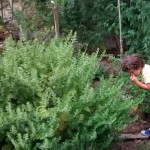 I pick beans, broad beans, peas, carrots, beetroot and the dill smells nice on my fingers. I don’t like courgettes but I help Grandma pick them. There is one big one which Grandma says is a squash and it gets bigger everyday. There is a big fruit cage with a net and pegs so the birds don’t eat the fruit. 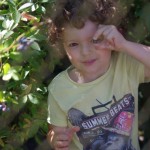 I like picking the raspberries and the one I don’t remember [loganberries]. At first Daddy says the blackberries aren’t ripe, but later there are a lot. I like blueberries and making jelly with the blackcurrants which I eat after my dinner. One day a big black bird made a hole in the net so it could eat all the fruit. It was fun. I had to shout very loud so it got frightened out of the corner and Grumpy chased it out. Then we had to close up the net up with pegs again. 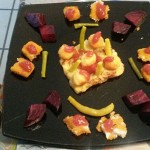 Grumpy makes yummy jam with the blackcurrants and the ones with nasty prickles which get stuck right through Grandma’s shoe and foot [Worcesterberries and gooseberries]. Grumpy makes nice bread and says it doesn’t have crusts so I can eat all of it. I have ham and jam sandwiches [separately]. Grumpy makes me lovely dinners with red sauce and makes pretty patterns on the plate.

There is a big lake near their house, and you can see it from a long way up the hill if you climb carefully up a rock. Daddy lifted me up to see it. At the top of the hill there is the biggest slide ever. [The luge run at the Col de la Schlucht]. 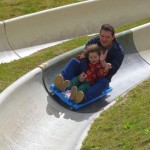 Grumpy bought tickets and we sat on a big chair lift and had to jump off at the top. Grumpy went down the slide first and then Grandma, but Daddy and I went past Grandma because we were going so fast. I liked it and we did it again. Aunty Leila took me later, but the people in front were going slowly, so it was faster with Daddy.

One day we went to a [flea] market. It was very hot. There were some toys but we didn’t buy any. We went home and had an ice lolly. I don’t like it when it is very hot. We had fans all day and at night in my bedroom. Aunty Leila and Grandma went to another market and bought me a toy I could make shapes with [Zoob]. Grumpy made a dinosaur. We called it Grumposaurus. Its legs were wobbly. There is a giraffe by the window. It made a long shadow on the floor. Grumpy helped me to draw round the shadow on some paper. 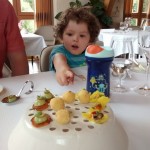 One day I went to Daddy’s favourite restaurant [the Frankenbourg]. I had a crispy ball [a foie gras appetiser which he loved]. But I didn’t like the green one [chilled pea soup amuse bouche]. I had purple and orange broccoli [and lots of less memorable vegetables, pasta and chicken]. Daddy had lots of dinners [the gourmet menu had seven courses] so I had to wait for my pudding. The man put it on a plate where I could see it until it was time to eat it. It was raspberry [and creamy custard] tart. 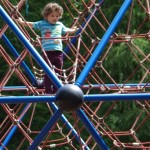 There was a big climbing frame with ropes in the park outside and I climbed nearly to the top with Daddy before we went into the restaurant. The toilet for the boys had a door that opened on its own. 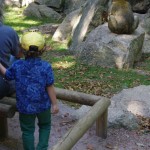 When Aunty Leila came we went to see the monkeys at Monkey Mountain. The big monkeys sat by the path and we could give them some special popcorn, but I didn’t want to. I watched everyone else do that. One monkey was very greedy and took all the popcorn in Grumpy’s hand. The baby monkeys were so cute. One had a ride on its mummy’s back. In one place they were eating melon and artichokes and sunflower seeds. They could jump a long way in the trees. In another place there was a big noise and a monkey fight. 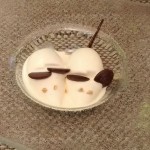 After that I went on a slide and then we went to Aunty Leila’s favourite restaurant. It wasn’t as nice as Grumpy’s food, but I ate some pasta and vegetables. I had two ice cream mice at the end, with chocolate ears but I couldn’t eat the tails [vanilla sticks], then they brought little cakes with the coffee. I liked the red jelly one.

When it was time to go home Grumpy and Grandma were very sad that I was going. But they will come and see me in Letchworth soon.