If you click on the images they will open full screen; it is then easier to see the ISS transits

As the third brightest object in the sky, after the sun and moon, the space station is easy to see if you know where and when to look for it! I signed up to get e-mail notifications of the visibility of the ISS from NASA-Spot the Station last November. The ISS observation web site gives more information than is contained in the Spot the Station e-mail.

But since then there have only been very limited opportunities to see it as we’d not had that many clear nights until earlier this spring! This week we’ve had clear night skies which have been dark as the moon is in the waning crescent phase so I’ve taken the opportunity to try to photograph the passage of ISS over Entre-deux-Eaux.

I decided to use a Pentax digital SLR with an 8mm fish-eye lens to get as much coverage of the sky as possible. The idea was to obtain the passage of the ISS as a continuous trail of light across the static background of the stars. The main problem has been in determining the exposure settings as not only can the ISS take over 6 minutes to go from horizon to horizon but for the earlier evening sightings the sky can still be lit by the last sunlight rather than night dark. There are not that many opportunities or much time to experiment! I opted to use the 100 ASA setting to reduce the noise (graininess) but for my first attempt I used an exposure of 30s @ f22 as I thought the image would be over-exposed with the very long exposure. That wasn’t the case. The attempt was when the sky was very dark and I was only able to see anything at all on the images by enhancing the images significantly. But even then the images were very poor and grainy.

Yesterday evening I tried again when the ISS was due to be visible (Time: Thu Jun 06 2013 10:57 PM, Visible: 6 min, Max Height: 77 degrees, Appears: WSW, Disappears: ENE). This time I decided to experiment with 100ASA at f8. But the sky still wasn’t completely black so I tried first with an approximately 2 minute exposure and then another with a 3 minute exposure to give images for further reference. These images both had good exposure and showed the partial track of the ISS clearly. However, the Pentax does a lot of processing when saving long exposures to try to eliminate random noise. So there was a gap of well over 2 minutes between the exposures. In addition, I was saving the images both as RAW and JPG files which added another few seconds to the delay between possible exposures. I had time before the next ISS pass to process the images and combined them into a single image using my usual Hugin panorama stitcher software to give a composite image which shows the west and east parts of the ISS path.

The ISS was due to pass again about 90 minutes later (Time: Fri Jun 07 2013 0:33 AM, Visible: 6 min, Max Height: 44 degrees, Appears: W, Disappears: ENE) and I decided to try to capture the total 6 minute overpass in a single shot. The sky was now completely dark so I chose to use the same aperture and ASA settings. However the ISS was lower in the sky this time and I failed to adjust the camera angle so the ISS passed through the centre of the image. Fortunately it was still totally within the frame! The arc of the path is due to the distortion by lens; had the camera been set for the ISS to pass through the centre of the image the path would have been captured as a straight line. The stars are blurred as the earth had rotated about 1.5º during the 6 minute exposure time. 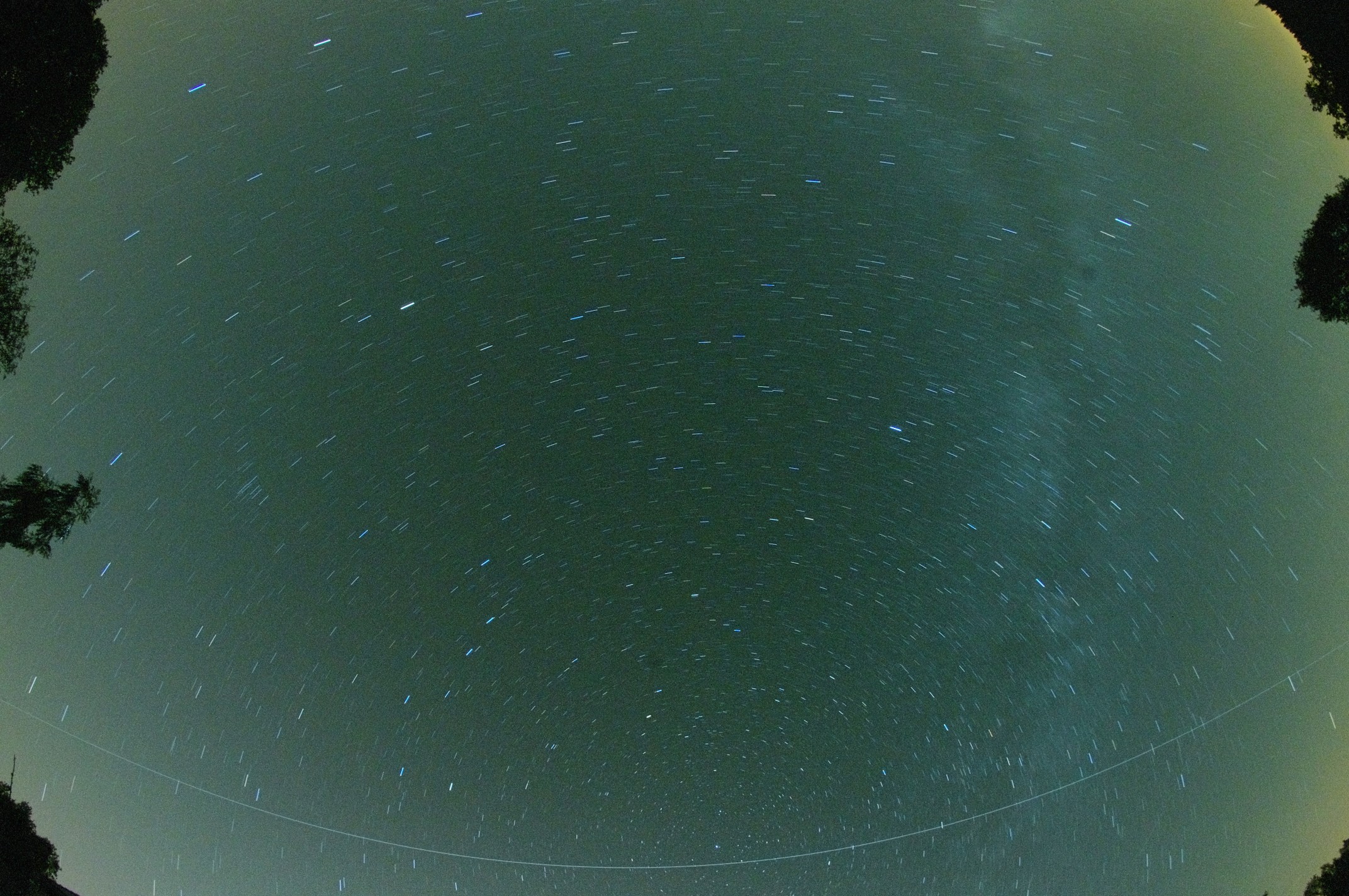 And this evening there was an overpass (Fri Jun 07 2013 10:08 PM, Visible: 6 min, Max Height: 51 degrees, Appears: SW, Disappears: ENE) but, although I could see the ISS, the sky background was too light to capture the ISS with the long exposure. The next pass was about 90 minutes later (Fri Jun 07 2013 11:44 PM, Visible: 6 min, Max Height: 49 degrees, Appears: W, Disappears: ENE) when the sky was dark. This time I set the camera angle to show the farmhouse. It was dark when looking south, east or west, but the ISS was to the north. So, although the passage was captured clearly the image shows the light pollution we get to the north from Saulcy-sur-Meurthe and Saint Dié des Vosges. 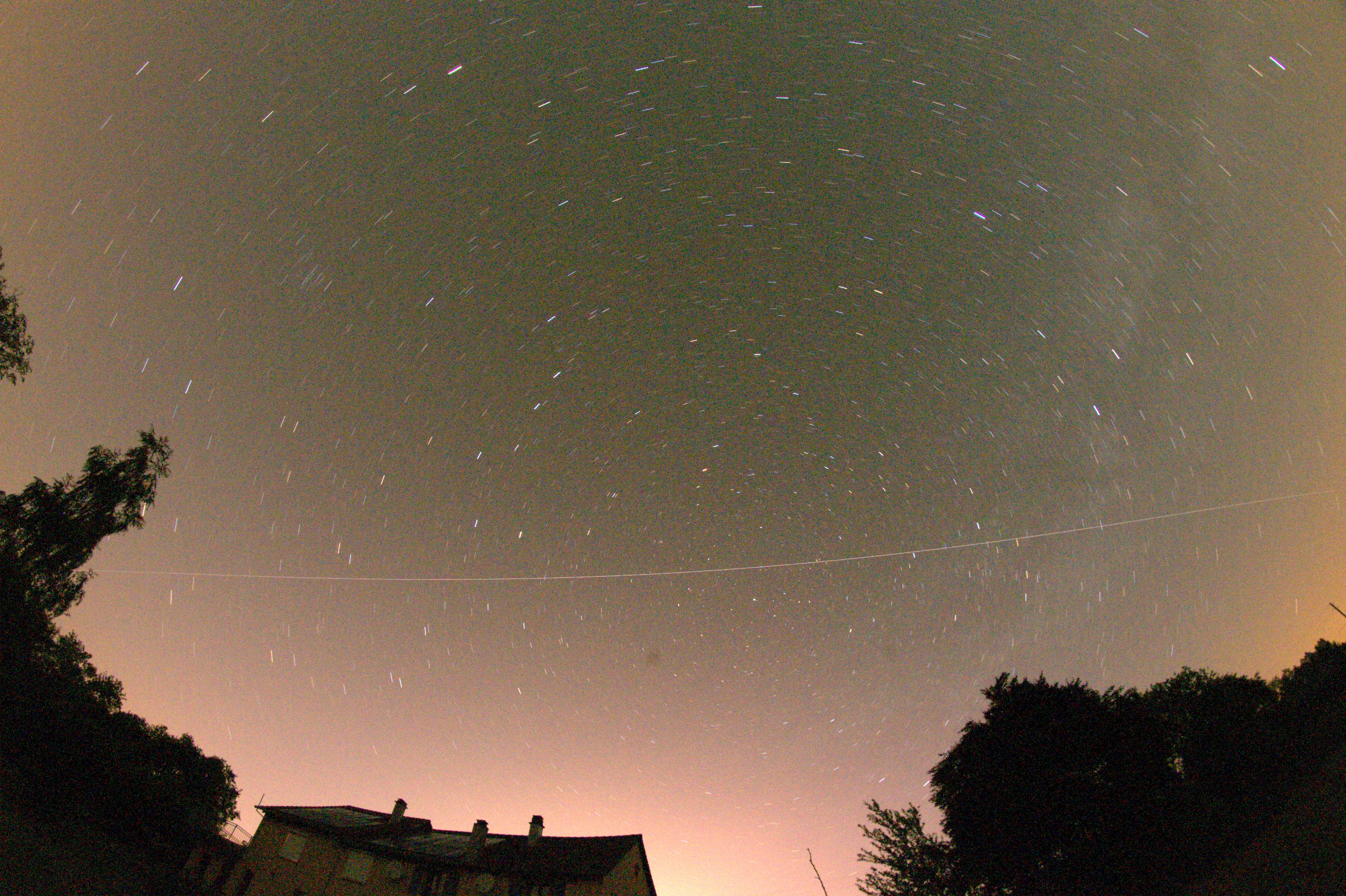