The oldies of Entre-deux Eaux were all agreed that nothing should be planted until the three Ice Saints’ Days had passed. “In fact,” Pierette observed sagely, “I always wait until after May 24th.” At May’s monthly gathering of elderly villagers, the weather was not the first topic of conversation. First there were the recent deaths to discuss more thoroughly than any coroner. This was hardly surprising as Janine’s husband had died that very morning after a long illness, and another club member’s cremation was taking place that afternoon. Having dealt with the deaths, conversation then moved on to health assessments of absent friends, and finally a gloomy review of the recent sufferings of all present. After that the weather and then we were all ready to be cheered by cake and crémant to celebrate the birthdays of all those who had survived.

John had kindly baked a Caribbean fruit cake with an added marzipan layer in the middle for Helen’s birthday (which falls on the day of the second of the Ice Saints, St Pancras). The oldies gazed at this foreign offering suspiciously, and opted for the more familiar gateau Saint Honoré, a delicious cream éclair creation, or for fruit tart. Pierette gamely nibbled a small piece and tried to think of something polite to say, but it took Claudine, a younger oldie who had hobbled in late on her crutches, to take a larger slice and pronounce that it was like pain d’épices (a spice cake). With this endorsement, the rest of the cake disappeared rapidly, and a toast was drunk.

St Pancras’ day itself was wet and dismal, but we decided to celebrate Helen’s birthday with lunch at the Belle Vue in Saulxures. In the past we have had pleasant meals on its busy terrace and an excellent Easter Sunday lunch. But on this day we were the only guests in a dining room seating thirty or more and the gloomy waiter would obviously have preferred to have had the time off, as he rattled off the names of the dishes at high speed and with an air of profound boredom. After a while we began to wonder if the chef had taken the time off, and we were being served pre-prepared and reheated food. The stagiaire (trainee) not only failed to put the dishes in front of the correct person but also failed to describe the food presented without a lot of prompting from his mentor. It was not a festive experience, and Helen attributed her subsequent dodgy stomach to the crab starter. 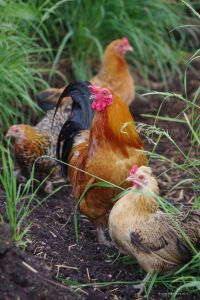 On a village walk

The baleful influence of the ice saints seems to have continued with very wet weather, and very few seeds have been brave enough to poke through the sodden soil which John had rotovated soon after our return from England. Only the broad beans, peas, courgettes and squash grown indoors in loo roll tubes look healthy. Dare we put them outside in the ground yet? Today’s hail and thunder are discouraging.

However, gardening under way, it was time for a thorough clear up in the farmhouse. For, despite the threats of petrol and diesel shortages, of panic buying in France and of a French air traffic controllers’ strike, Toby was sticking to his plan of driving over for the half-term week with Jacob, his new partner Rachel and two of Rachel’s daughters (the eldest daughter was flying out). Preparations involved John building some deep shelves in his workshop and then shifting the oak planks stored in the farmhouse dining room onto them (the big wooden “sunbeam” style barn doors will get made one of these days!) During the course of cleaning up, Helen slipped on the attic stairs while carrying a clothes airer and a plate. You will be glad to know that the plate survived the bumping unscathed. 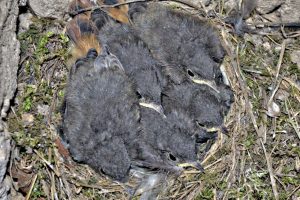 An interesting discovery during the clean-up came during a rummage in the first barn for the old mop and bucket to clean the barn floor. Behind an old door, above the mop and bucket, and behind the cobwebby bikes hanging on hooks, was a small alcove with a wispy nest containing tiny eggs. John has been tracking their progress and hatching with his camera. The tiny black redstarts emitted an amazing volume of noise when their mother left to find food, but didn’t think much of the shrieks of the two youngest humans when they arrived or appreciate the noise of the nearby washing machine. 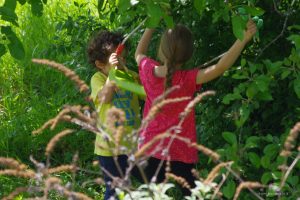 The rain, of course continued, with bad floods across northern France, but the travellers arrived safely in the middle of the night. The two youngest, Jacob and Farrah, didn’t mind the rain at all and revelled in jumping in all the puddles and playing in the long wet grass. Other highlights included the expedition Toby led to the trenches at Le Linge (both the older girls having studied the first world war at school). The two youngest visitors entered into the historical spirit of the place, yelling “Kill the Germans!” as they hurtled along the stone-lined trenches between German tourists. On the wettest day, to reinforce the history lesson, we walked over to the Saulcy military cemetery, pointing out the graves of the Jewish German soldier and those of the French troops from north Africa and Indochina, and the two youngest behaved with impeccable decorum before finding more puddles in which to drench themselves and others. Sweet-making demonstrations at the Confiserie des Hautes Vosges were popular as was the chair lift up and wheeled luge run down at the Col de la Schlucht. 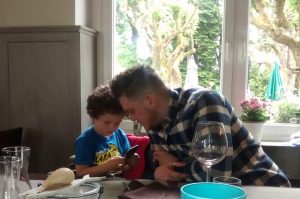 A game between courses

All too soon their six days were coming to an end. The visitors decided not to cram in the fairy tale Bavarian castle of Kaiser Bill at Haut Koenigsbourg before a farewell lunch at the Parc Carola Restaurant in Ribeauvillé, but to have a leisurely start and explore the quaint walled village of Riquewihr afterwards. Chef Michaela performed wonders for our table of eight, producing amuse bouches for all, six dishes from the menu gastronomique for three of us, four dishes from the menu découverte for one of us, two orders from the menu Carola and two children’s menus. It was a lovely meal, which we all enjoyed. I think the two youngest were most impressed by their ice cream mice.

During the course of the meal Toby was running his hands through Jacob’s hair when he discovered a strange lump, unlike anything any of us had seen before. Fortunately John had insisted that Helen should book a doctor’s appointment that evening to check that her ribs were merely cracked by the fall (they were), so Jacob was taken along too, and a bloated tick extracted from the back of his neck. He whimpered at the sight of it, and was consoled only by a sucker/lolly from the nice lady at the pharmacy. All they have to worry about now is Lyme disease, which seems to be the current French prevention campaign. To compound the day’s problems, our car (Bluto), which Rachel was driving back from Riquewihr up the Col de Bonhomme, started losing power and showing engine and VSC warning lights. After some discussion with John (in the doctor’s surgery) they decided to try to continue to the top and from there they hoped they would be able to coast down fairly easily. Bluto is now sitting outside Mme Laine’s waiting to be tested by her grandson who has a car repair workshop there. Did we mention that Toby had sliced his fingers deeply with John’s sharp bread knife? Nevertheless a good time was had by all and the day’s good news was that the air traffic controllers had called off their proposed strike for the next day, so Rachel’s eldest daughter would be able to get back in time for her first A-level!

In between all this, there were some exciting tennis matches at the French Open in Paris (during the breaks from rain) and some football friendlies (not to mention the riveting new board games chez Blackmore in the evenings) and now England’s footballers along with those of Wales and Northern Ireland are enjoying the delights of French food and culture (?) before their European Championship matches kick off.

The house has seemed very peaceful in the last four days and we have posted off our votes in the EU referendum, and hunted for treasures (alas none to be found) at the Entre-deux-Eaux flea market this Sunday before it rained in the afternoon. Only a couple of white and purple posies of Marguerites, clover and chives picked by Jacob and Farrah remain to remind us of the family’s lively presence, and they are starting to droop. And to emphasize the quietness, today the baby black redstarts left their nest in the barn for the first time.

However, we shall soon be back in Letchworth for a couple of weeks and hope to see some of you there.