It was the policeman with the huge gun who impressed Jacob and Farrah outside the castle of Haut Koenigsbourg. And he wasn’t on ceremonial duty. The massacre in Nice and the murder of the French priest have reinforced the need for tight security even in the most picturesque tourist spots.

Kaiser Wilhelm, who had been presented with the ruined mediaeval Alsace castle after their victory in the Franco-Prussian war, would presumably not have been surprised by the heightened security in troubled times. After all he had spent a fortune on a lavish restoration of the castle, complete with towers and pinnacles and a pseudo-mediaeval banqueting hall with banners and weaponry. Alas, having completed his prestige project in 1908, he did not have many years in which to show it off. But he would have been gratified by the coachloads and carloads of tourists in August 2016.

After the policeman, Jacob and Farrah were impressed by the castle’s well which presumably had survived all the sieges, robber barons and the looting and burning of the castle several hundred years earlier (1633 on checking) by the Swedes. They also enjoyed firing imaginary arrows from the restored battlements and imagining the canon fire.

From this you will gather that we have been entertaining Toby, Rachel, Jacob and Farrah for the last ten days. The patio has been improved by the addition of a 3 x 2 m tubular-framed swimming pool and garden tables and chairs sprawl across the patio, balcony and orchard. As we lunched outside one day in the shade of the orchard trees, ripe damsons began to drop on us. As they were tasty, after stewing with some sugar, today we have collected a further eight kilos from the lower branches. Other fruit has not been as abundant, with sufficient for gooseberry crumbles, blackcurrant jellies and blueberries and loganberries in muesli breakfasts, leaving nothing for the freezer this year. A further home entertainment was provided by the farmer cutting, turning and baling the grass in the fields around us, which fascinated the children as they watched from the patio and arboretum.

As well as fighting off marauding Protestant Swedes, the children’s sketchy historical education continued with Asterix-like fights against the Romans as they scrambled up a hillside and fought their way with sticks along a ridge towards the gallo-Roman fort of La Bure on the far side of St Die. This fort was sadly lacking in cannons, but large round stones were stacked up as if in readiness for repelling invaders. Less bellicose walks involved inspecting village rabbits and picking the meadow flowers from the field to the north.

There was the usual trip to the sledge run at the Col de la Schlucht and a meal at Toby’s favourite restaurant, the Auberge Frankenbourg, where the adults indulged in the gourmet menu and the children behaved impeccably like seasoned diners.

Before their visit, John had also proposed trying a new restaurant which the Frankenbourg chef had recently praised. This was no elegant town setting. Our satnav directed us over the hills on the Strasbourg road, then turned off and headed uphill and looped downhill in zigzags, with the last kilometres behind a tractor with trailer heavily laden with hay bales. Finally we were in the long narrow village of Steige which is famous for its December advent windows and its large family run distillery. Near the church we turned left and uphill to a wooden chalet-style farmhouse. A goat came out of its hut and bleated a welcome. We were also welcomed verbally at the door by one of the young owners of the Auberge Chez Guth. 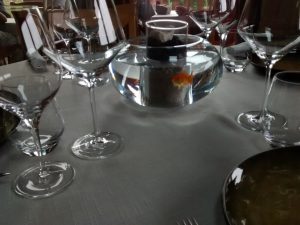 As rain was forecast, she suggested aperitifs on the terrace, then lunch indoors. We opted to go straight in for lunch as too much alcohol was not a good idea with those bends to negotiate on the return journey. Inside the tables were elegantly laid in the big room that still had a farm feel despite the goldfish circling in a large glass bowl. From the rapidly served amuse bouche of nettle soup with acidulated celeriac at the bottom, we knew we were on to a good thing and thoroughly enjoyed our new find.

And now, having got the garden here in shape, it is time to return briefly to the overgrown lawns of Letchworth, mentally prepared for a courgette and coriander glut when we return to E2E..