If you’re still recovering from Christmas indulgence and are dieting strictly, this is not the newsletter for you, as food is the main subject.

All this time we’ve lived here we’ve not realised that we have an extra chance to eat pancakes today, February 2nd, as well as on Shrove Tuesday, if we keep both French and English traditions. We trudged through the snow yesterday to our next door neighbours, and they suddenly mentioned Chandeleur, pancakes and gold coins. France is such a secular society that they weren’t too sure of the origin of the tradition, but knew you had to toss your pancake with one hand whilst holding a gold coin in the other to ensure prosperity for the whole year. Cedric’s grandfather kept an old gold Napoleon for the occasion. In the old days, at Candlemas here people would bring back lighted candles from church to chase away evil and assure good crops for the year. And then when England’s eating pancakes before Lent starts, France eats beignets made from fried yeasted dough (doughnuts without a hole).

Talking of forgotten origins, our Scrabble group were discussing the galette des rois, a large pastry pie usually sold with a frangipane or apple puree filling. Nowadays it seems to be eaten throughout January at festive gatherings, and they were surprised that the English had nothing comparable (that I could think of!) The controversy arose over the kings in the name, with one of the group shouting loudly that it had nothing whatsoever to do with religion, and ignoring the others who pointed out that it used always to be eaten at Epiphany to celebrate the arrival of the three kings. As we are very fond of anything marzipan flavoured, John has willingly followed the trend of extending its date of consumption and has made at least 3 galettes des rois so far (with considerably more filling than the shop ones). However he didn’t put in the fève, originally a bean, now usually a collectible ceramic figurine, or wear the golden crown that’s given to the finder of the fève.

Of course, we’d also had a good dose of marzipan over Christmas, on our Christmas cake. It was sad that the whole family couldn’t be with us over Christmas, as originally planned. Ryanair is still a dirty word in the family, after they cancelled their Basel flights so close to Christmas. And then BA gave us some anxious moments with their threatened strike. In the end, the snow seemed the worst enemy, with Eurostar trains stuck in the Channel Tunnel and some British Airports closing down for periods. But Heathrow stayed open and Toby, Leila and Stella all arrived safely on December 20th, and the next day we celebrated Leila’s 30th birthday in style at the Frankenbourg restaurant. John had been worried about whether Christmas turkeys and capons needed to be ordered in advance and where best to purchase a tasty big ham. However, our local supermarket, Cora, did us proud and we had a roast ham on Christmas Eve, a capon on Christmas day and plenty of leftovers for Boxing Day. We toasted absent family, and thought of John’s sister’s family grounded in Billericay. On the 27th, their last full day here, the sun came out and there was fresh snow on the hills – ideal for a day’s skiing in Gérardmer for Toby and Stella. (It was so long since we’d been up to the ski slopes, that we even took the wrong turning and meandered up towards some remote hamlet).

It seems as if no newsletter is complete without a mention of sewage. So here goes, – hopefully the last mention for a while. The day after everyone left, the APE man rang and offered to come round shortly. (The APE man deals with Assainissement, Pompage and Entretien and we’d rather given up on his assurance that he would come sometime to empty our septic tanks). He arrived in the rain wearing a cowboy hat and tight jeans, and while we were showing his overalled young helpers the septic tanks, he rashly drove his tanker onto our field, where the wheels sank into the mud from the thawed snow and spun round ineffectually. No amount of revving, rocking, swearing, tiles and branches under the wheels would shift it. The ruts just got deeper. Hat still on and mobile clamped to his ear, the APE man descended and stomped off wordlessly down the road. His assistants shrugged helplessly as he’d not spoken to them. He returned having been unable to rouse any tractor-owning neighbours. Then, after more digging in front of the wheels, filling those holes with more broken tiles and tree branches, the lorry did one final lurch and roll and somehow made it out! He parked on firm ground by the front door of the farmhouse, sucked up the sludge out of our main tank and the now-disconnected old tank, hosed down and rushed off, presumably to make a bit more money before further snow would make January a bad month for outdoor work. At least we’re legal now.

2010 was launched at midnight with a phone call from Toby to announce his engagement to Stella. The fireworks immediately went off in the villages all around. After all that excitement, things went quiet here for a week or two until I went, for the first time, to the annual meal offered by the Mayor and Council to all the village over 65s. (John wishes to point out that he doesn’t qualify yet).

I knew enough about the importance of food to arrive promptly at 12. After the mayor’s opening comments (including mention of those who are now in care homes and unable to come so he’d visited), everyone settled down at the long tables to chat as a potent fruit punch was brought round, followed by nibbles (squares of white bread, with fish and pate and salami toppings). More punch followed and conversation became animated. Then the white wine was served, to accompany a plateful of fishy starters – a big fish pie, prawns in mayonnaise, salad and a large prawn-like creature in full armour draped across the top (no one was sure quite what it was or how best to eat it!). It must have been during this course that the musical “animation” arrived. The man started with some amusing anecdotes (though I always missed the punchline!) and followed with tunes from yesteryear. Then there was a between-courses delicious lime sorbet, served either with or without a very generous slosh of vodka. By this time I was slowing down a bit on the alcohol. Around 3 o’clock the red wine replaced the white in honour of the main course, a huge slice of Beef Wellington, with a separate individual bowl of potatoes in a cream sauce. It was just as well that John wasn’t there to stir up old prejudices with mock-innocent comments about Wellington’s inclusion at a French feast. Then the song books were produced. A nice touch was that the singer took her microphone round the tables and featured the voices of some of the elders. There was then a special stand-up sit-sown song to welcome the cheese board (and a round of wine), and everyone tucked in again. Then there was dancing – my goodness, they are nimble on their feet, some of them! Fruit salad brought the dancers back to the table. And at some point the accordionist and singer started to assemble long alpine horns and played them beautifully. Then just as I was thinking it was all over, the coffee, chocolates and liqueurs arrived and there was more dancing. And there was still a lot of dancing as the first people (including M. Laine who’d only come for the food, and wasn’t bothered about the company) started to leave. The roads must have been rather dangerous as the last revellers tottered home around 7 p.m.

As if the aged of Entre-deux-Eaux hadn’t had enough excitement, four days later the Assemblé Générale of their monthly club took place at 10.30. Most AGMs here seem to culminate in a large meal, to encourage attendance and payment of subs. The business lasted only 10 minutes, as the committee was already in place, and the outings had all been arranged. After an aperitif, the hearty eating (and drinking) started – with pastry in every course. The main course was a local speciality baeckeoffe – everyone had a large casserole of lamb, beef, pork, potato, leek, carrot, wine and juniper berry stew, sealed with pastry. Fruit tart followed. Around 3 the usual club activities took over, with cards, Scrabble and gossip. Then, fearing lest anyone was still hungry, around 5 the champagne glasses came out and galette des rois was produced and we all toasted each other. I arrived home about 8 hours after I set out for the AGM, to find John on the phone to Dorinda who was proposing trying out a restaurant in Alsace the following lunch time!

La Table de Mittelwihr, which Dorinda had chosen, lies on the wine route, near Riquewihr, and was surprisingly busy for a January weekday, with a good menu of the day. 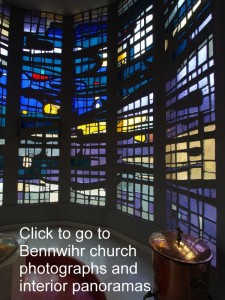 However the highlight of the day was stopping to see a modern church in the next village of Bennwihr, which we’d always just driven past. The old church had been destroyed towards the end of the war, as the Germans clung on tenaciously in Colmar area. The new church was very light and airy with its white pews and pale floor, with seven huge dramatic stained glass windows on the south side and more attractive glass in the side chapel and baptistry. 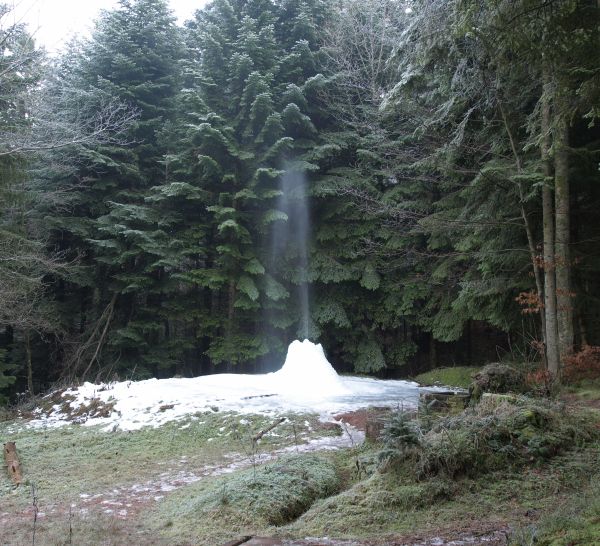 I don’t think we need to include any photos of the snow here, as the UK has seen its fill this year. Though it has been very pretty all month looking out of the window, and also walking. During one of the thaws we came across a unusual sight on the edge of the forest. The field was green once more, but at the edge was a circle of white, icy snow with a jet of water rising out of a white cone formed by spray from the fountain freezing as it fell.

Usually January is a time for sorting out garden seeds, though somehow the snow hasn’t stimulated green thoughts. The seeds which have been most difficult to get hold of here have been parsnip (closely followed by Brussels sprouts). In the earlier years we always had to get them from England, but had been finding them here occasionally in the last couple of years. And now its official. The Times (so it must be true) reports that in France, having spurned parsnips as fit only for animals and the British, apart from during the war years, “the humble parsnip is being hailed a symbol of culinary refinement and political correctness, with renowned chefs and well-heeled Parisians paying up to £3.50/kg for a taste.” The article also mentions the return of the Jerusalem artichoke, so our garden is doing well, on two counts, though we won’t be planting the other légume oublié, the swede (too many unpleasant school dinner associations).

So on this auspicious day of Chandleur, even though we haven’t got a gold Napoleon in one hand and a frying pan with pancake mix in the other, here’s to good crops (especially parsnips) and sufficient riches in the coming year!