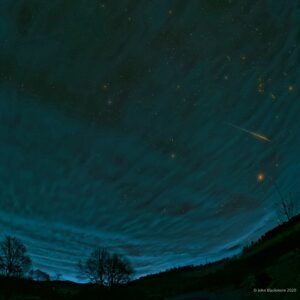 The one Geminid meteor

The sky was cloudy when I tried to photograph some of the Geminid meteor shower on 14 Dec. After midnight I set up my  camera with a 7.5mm fisheye lens in one of the nearby fields. I adjusted it to take 120 30s exposures automatically with a one second gap between each exposure to allow the file to be saved.

I’d expected to see perhaps a dozen shooting star images in the resulting photographs over that hour, especially as I’d seen one while I was setting up the tripod. I was wrong. And attached is the only other one in that hour-long set I captured where the clouds cleared enough to see the sky (and I wonder how many I missed in those one second gaps!) It just got gloomier and gloomier. But at least I could just wait indoors in the warm as it was near zero Centigrade outside.

I also made a time-lapse video of the photos. The meteor shows at about 3 seconds.