To download a printable Adobe Acrobat version click on this link E2E2011_issue_2-Festivities and feasting.pdf (two A4 pages)

Once both the village volunteer firemen and our village postman had called with their Christmas Calendars, we knew that December was nearly here and it was time to get out the decorations. With the star lights illuminating the windows, Peruvian papier-mâché angels grouped round the crèche on the window sill, and candles, pine cones and silver balls decorating the low table, we were in the mood for the traditional festivities.

However, when Roger and Dorinda returned for a short stay in their résidence secondaire and we discussed one of our favourite Christmas Markets held in the illuminated barns of a small village, it was pouring with rain and Dorinda, having broken a toe, was fearful of crowds, so we didn’t go. Then, when Nicola, who used to live here, drove up from the south to visit friends and experience again the St Nicholas parade through Saint-Dié-des-Vosges, it was cold and wet again, so none of us went to watch the bands, floats and the good bishop disappearing in a cloud of fireworks though the cathedral portals.

We did, however, share Dorinda’s end of November birthday meal at one of her favourite restaurants in Rouffach who’d offered to throw in two bottles of champagne and a birthday cake; and very festive it was. It was a sunny day and we popped into Kaysersberg first for a little Christmas shopping amid its decorations, and afterwards (fuelled by champagne and good food) went into Colmar to look at the work of craftsmen who during Advent show their wares in the old Customs House, with Christmas market stalls outside. And on the day after the unvisited St Nicholas parade, we met up for Sunday lunch with Nicola, a friend of hers from the south, Roger and Dorinda at Nicola’s former favourite restaurant up in the hills at Labaroche (la Rochette, not our former favourite, the abandoned Blanche Neige, which appears unchanged inside except for the lack of tables and chairs and still has many road signs to it). Nicola’s restaurant had been completely revamped since we all last met there, and was very stylish, but the welcome was as warm as ever, and their speciality baeckeoffa d’escargots (a sizzling casserole of snails in a white sauce with vegetables) was still among the starters. Having followed it with a hearty Alsace venison and noodles main course we were oblivious to the low cloud enveloping the hills and the rain lashing against the windows, and we didn’t even feel a pang at missing the visit of St Nicholas to the children of Entre-deux-Eaux (in the past a rather noisy, undisciplined event). And as an evocation of the warmer south, Nicola gave us some lemons from her garden and some locally produced nougat. 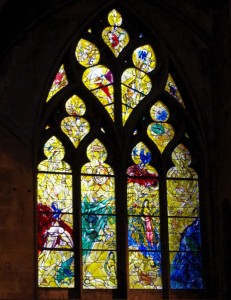 However, we hoped to catch a bit of Christmas wonder in the cathedral, streets and Christmas markets in Metz this week. We’d never explored Metz apart from short stop on one of our journeys so we booked an overnight stay in the Hotel de la Cathédrale, which sounded traditional and comfortable and handy for the famous Chagall cathedral windows and the new Pompidou Centre there. However, yet again we had driving rain allied with an icy wind that wrenched umbrellas inside out. The cathedral was cold and its windows drab against the dull sky outside (including the Chagall Creation window which could have glowed golden) and the Christmas market stalls were distributed among windswept squares, and we got blown, heads down under umbrellas, past their gaudy, tacky wares. 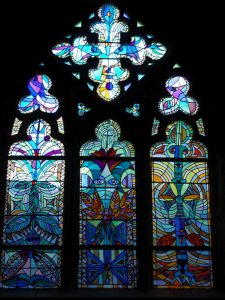 Metz-St Maximin church
one of the Jean Cocteau windows

An unexpected delight in the back streets was the church of St Maximim (who was he?) with its strange windows by Cocteau, evoking lush jungles and totem poles rather than Bible stories. As we walked from there to the station, an apple-faced lady opened a gate through which I was peering, and offered to show us one of her favourite haunts, the quiet seminary garden, but John had beaten a hasty retreat even before she mentioned the stylish, panelled restaurant in the seminary. Outside the railway station (built in a German imperial style in 1905-8 when Metz was part of Germany) we were momentarily diverted from its baronial splendour by the colourful Christmas market in recreations of railway carriages. Inside, neo-Romanesque halls and corridors stretched in splendour into the distance. As for the station bookshop, vast as a Carnegie library with alluring local history displays … it was sumptuous (and very warm!), and I totally overlooked the stained glass window of Charlemagne enthroned in glory in the great hall not to mention Kaiser Wilhelm’s apartments and the platforms designed to receive troops on horseback. That night we dined not in the splendour of the Grand Seminaire but enjoyed the menu du pacha in an excellent little Lebanese restaurant tucked into a side street. The following morning was, if anything, even wetter and colder and we headed for the museums, and spent a wonderful morning in a maze of rooms celebrating the Gallo-Roman finds and mediaeval architectural splendours; the paintings were off-limits that day, but we had seen such riches already. We also decided to save the Pompidou Centre for another day – preferably when it had some interesting exhibitions, rather than a third of its galleries shut.

As for the intervening months since the previous newsletter, in July we spent an enjoyable week in Antibes with Toby, Stella and Jacob. (It was fun to watch Jacob examining the Picasso sculptures at the Château Grimaldi and revelling in the noise and sights of the food market and fountains, and we enjoyed the Chagall Museum in Nice). I spent August making a large marriage patchwork quilt, while John slaved away on the floor tiles and walls of the barn, which now gleam pale grey and white, so practical and elegant for storage, laundry and freezers (apart from the floor showing all muddy footprints). In September we enjoyed a week in the Lake District with all the family following the lovely wedding of John’s nephew Steven to Helen (another in the family now!). In October we had some pleasant weather for walks, as well as good meals during the week of John’s birthday. November seems to have disappeared in a haze of heavy colds, autumnal garden clearing, interesting books, TV crime series and some good football matches, the latter thanks to our newish French satellite box and motorised dish, which allows us to access satellites transmitting channels from Mali, the Gambia and Senegal which show various European paying channels for free.

Hope this has been a good year for you! Joyeux Noel!